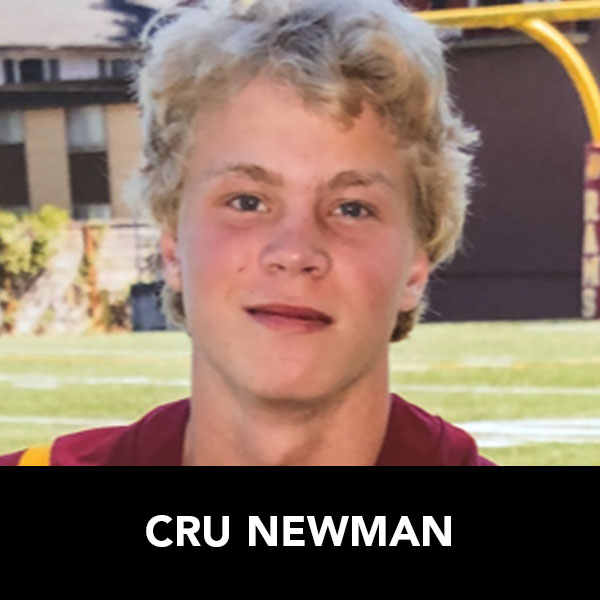 BIO: Cru is a sophomore and two-time letterman in football and basketball. Cru has earned 2nd team All-State honors at quarterback, 1st team offense in the Mt. Hood Conference, Mt. Hood Offensive Player of the Year and voted the Offensive Most Valuable Player by the State Champion Rams (the first underclassman to be voted this award in Coach Pyne’s 20-year history). Cru led the state with 37 touchdowns, over 2,700 passing yards, 500 rushing yards and only 4 interceptions. The Rams Averaged 49 points per game. Cru carries a GPA 3.7 and is a member of Central Catholic’s Football Leadership Council. The Rams were picked for the ESPN game of the week for the Mt. Hood Conference Championship. Off the field, Cru puts in the work with year-round speed and agility training and organizing throwing sessions, playing 7on7 while also running track. When Cru is not training, he is hanging with his buddies on the boat, wake surfing, wakeboarding and chilling on the beach with a bonfire. The most impressive thing about Cru is how he embraces his role as big brother to his 14-year old brother Beau, 5-year old sister Charlie and Rocky, his dog. His sister always makes him chase her on the field after every game, a ritual that he can’t pass up and a reminder that family is everything. Cru faced an uncontrollable event when his appendix ruptured last May while in Bend. He was in the hospital for 3 days. A week later, he went back into the hospital with an infection, lost 20lbs and had to use a walker for weeks. Cru was determined to get back in shape during mid-summer conditioning and ultimately be ready for the official start of practice. The hard work paid off as he was named the starter to open the season against a Camas team that had never lost to an Oregon team.